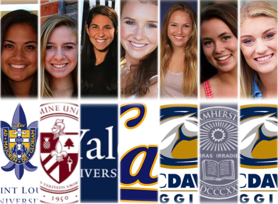 SAN DIEGO -- Some dream about competing on the college field hockey stage, but for a group of talented student-athletes it is now a fast approaching reality.

Seven RUSH girls will go on to play college field hockey this year, with six of them signing National Letters of Intent this winter.

NLI are contracts between a student-athlete and institution confirming athletic scholarship money once they are admitted to the school. It also marks an end to that lengthy recruiting process. NLI also come with a letter detailing the athletic scholarship awarded for their first full academic year to be signed by the athlete as well.

Each year the girls will sign a contract re-confirming their athletic scholarship and any additional scholarship money awarded for the upcoming academic year. Each Division I Field Hockey program is given 12 full scholarships. Division II programs are given about six. Because NCAA Field Hockey is an equivalency sport, this means schools can divvy up their (12 or 6) scholarships however they want to the girls.

The average college field hockey roster holds 23 players. However, some teams carry a smaller roster to be able to offer more scholarship money to players.