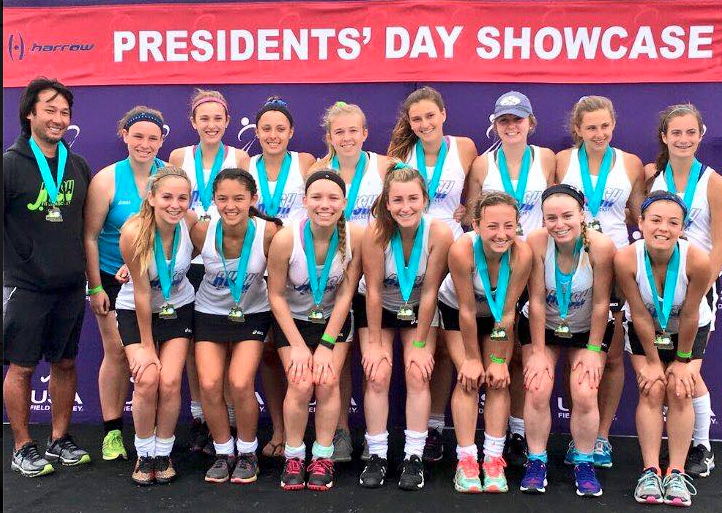 On their final day of play, RUSH Field Hockey faced arguably their toughest and most renowned opponents yet.

RUSH Field Hockey had a quick start against the Louisville-based field hockey club IFHCK, with a goal from Katie Schneider. This was Katie's fourth goal of the tournament.

IFHCK rebounded with a goal making it the first strike against RUSH all tournament. Not missing a beat, RUSH responded with a winning goal from forward Ryan Poe. This was Ryan's second of the tournament.

In their last game of the tournament, RUSH tied Jersey Elite (1-1) despite out-shooting their opponent and a number of great build ups from the backfield . The result- combined with their scoring records and wins, clinched gold medals and smiles all the way home.

On the first day of tournament play, RUSH Field Hockey jumped out to a fast start with six different players scoring.

With an early morning game, RUSH defeated Charlotte Ambush (2-0) to earn their first win of the tournament. Goals were scored by Sawyer Post and Katie Schneider with assists from Kathryn Peterson and Maddi Theodore.

In their second and final game of the day, RUSH shutout Majestx Elite (5-0) to gain another win and shutout on the day. Goals were scored by Ryan Poe, Megan Rodgers, Katie Schneider, Meghan Schneider, and Brynn Zorilla. RUSH goalkeeper, Zoe Williams and the defense have kept their opponents scoreless and will continue that feat for the next two games.

On Sunday, RUSH Field Hockey continued their dominance with a hat trick and a pair of shutout victories.

RUSH wasted no time at all tallying a (4-0) win against BCFHC ST Storm in their first game. The  goal scorers: Sawyer Post, Megan Rodgers, Katie Schneider and Maddi Theodore. This marked their third win and shutout of the tournament.